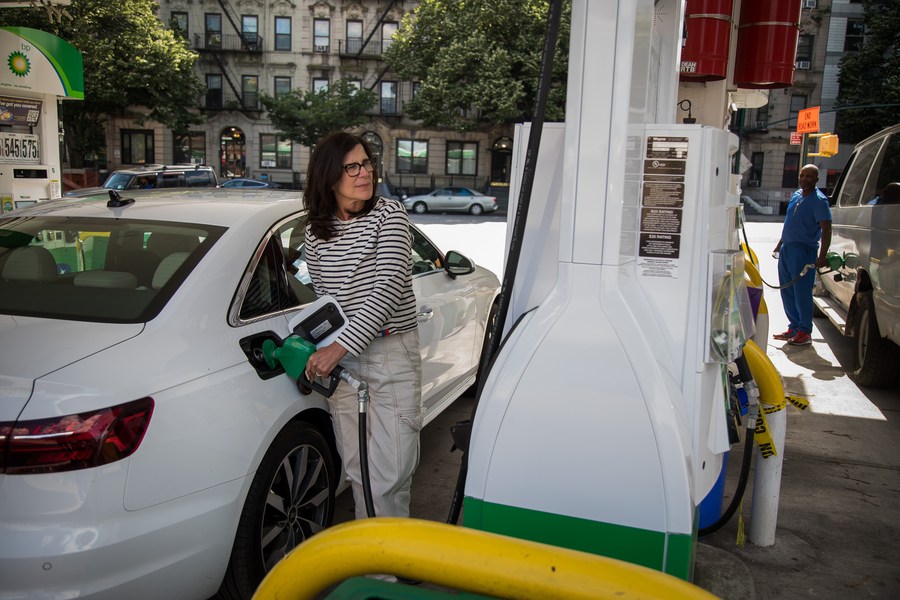 People fuel vehicles at a gas station in the Brooklyn borough of New York, the United States, on June 10, 2022. (Photo by Michael Nagle/Xinhua)

“Food prices have had the biggest impact on our spending habits and consumer behavior. We buy only items that are on sale and try to avoid the items whose prices have skyrocketed,” said Wendy Tavenner, a retiree in the greater Seattle area.

With gasoline prices skyrocketing recently, Ikeuye has started to search for cheap air tickets to San Francisco instead of driving.

FIND WAYS TO CUT BACK

“It used to be much cheaper to drive. These days, it costs more dollars to drive up the North, which is way more expensive than pre-pandemic,” Ikeuye told Xinhua over the phone.

The price of gasoline shot up 48.7 percent from May 2021 to May 2022, according to the most recent data published by the U.S. Labor Department.

The average cost of a gallon of unleaded fuel stays around 4.98 U.S. dollars – a significant uptick from 3.07 dollars one year ago, according to American Automobile Association.

To cope with soaring gasoline price, many Americans have found creative ways to reduce driving. This is even true to the families that normally would not fall into the low-income household category.

Vinh-An Trinh, a computer engineer at a fast food restaurant chain, and his wife, a government lawyer in Los Angeles County, have raised three children.

With their relatively stable jobs, the couple has not yet been significantly impacted by inflation. However, like millions of other American families, inflation does leave a mark on them. To save gasoline, for a while, Trinh has chosen to walk to school and pick up his children. 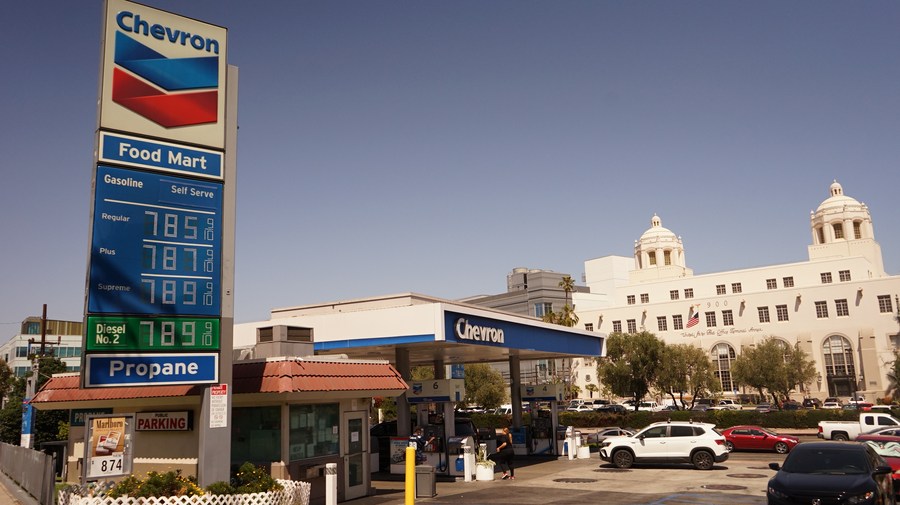 Gas prices are displayed at a gas station in Los Angeles, California, the United States, June 1, 2022. (Photo by Zeng Hui/Xinhua)

In comparison with Trinh who can largely maintain his old way of life, inflation has hit retirees especially hard, with some of them finding it hard to manage.

“I have less expenses than I used to… Although I don’t drive much anymore, it’s harder to make ends meet,” said Amy Neifeld, a semi-retired New Yorker on Monday.

Neifeld said she didn’t use car in her daily life anymore due to high gasoline prices, lack of parking lots in New York City and more free time nowadays.

Sarah Mullins, who teaches at the Fashion Institute of Technology under The State University of New York, said she tried to use car less, make stuffs last longer, to be better about cooking meals and not to eat out.

“It’s a fact, but I have a family and it’s made an impact on our lives,” said Mullins.

“We rarely drive our old car. Instead, we walk as much as possible to the stores close to our home,” Wendy Tavenner, a resident of Snohomish County in Washington State, told Xinhua via email.

Tavenner, a retired administrator for a private school in the greater Seattle area, and her husband, also a retiree, have also cut back their expenses on grocery shopping.

The index for meat, poultry, fish and eggs increased the most, up 14.2 percent, with the index for eggs surging 32.2 percent over the 12-month span through May, according to the U.S. Labor Department’s Consumer Price Index (CPI) report released in June.

A woman shops at a grocery store in the Brooklyn borough of New York, the United States, on June 10, 2022. (Photo by Michael Nagle/Xinhua)

“Food prices have had the biggest impact on our spending habits and consumer behavior. We buy only items that are on sale and try to avoid the items whose prices have skyrocketed. In our area those include all dairy and egg products, so we’ve shifted our diets a bit, too.”

Tavenner’s experience has spoken loudly about the effect of inflation on the retirees who are more likely to rely on fixed income. Their purchasing power is mostly likely to be eroded and squeezed by inflation.

“Inflation has been especially high in the cost of fuel and food. The price of gas at the pump is a political flashpoint,” said Sebastian Mallaby, the Paul A. Volcker senior fellow for international economics at the Council on Foreign Relations, a New York-based think tank, in an interview with Xinhua.

Asked if there are any tools left for the Joe Biden administration to fight inflation, Mallaby said, “President Biden needs to signal that he cares about inflation. But the truth is that the job of tamping down inflation is for the Fed. The best thing that Biden can do about inflation is to continue his current policy of supporting the Fed’s leaders.”

Tara Sinclair, professor of economics and international affairs at the George Washington University, shared a similar view with Mallaby that is to “have the Fed do their job of addressing inflation by reducing spending on goods and services.”

The Fed announced a hefty interest rate hike of 75 basis points on June 15, the biggest increase since 1994. Experts warned that mortgage, car and credit card payments are expected to jump significantly.

Based on a calculation by The Hill, under the new interest rate, a mortgage payment on a median-valued home of 400,000 U.S. dollars would now be about 1,875 dollars after a 20 percent down payment. Last year, the monthly payment on the same home would only cost 1,335 dollars.

As millions of Americans have felt soaring inflation at their grocery stores and pumping stations, the White House stated that “We’re going to make clear that tackling inflation is our top economic priority,” said Brian Deese, one of Biden’s top economic advisers, told CBS on June 19.

Biden vowed to let the Fed do its work to fight inflation on a number of occasions, an approach that many economists and analysts question whether that is enough.

In his article published by The National Interest in January 2022, Desmond Lachman plainly stated that “By so doing, he seemed to relieve his administration’s budget policy from any responsibility for having contributed to the United States’ inflation problem.”

Regardless, the Fed has made controlling inflation as its central task. Three days after the Fed raised the interest rate by 75 basis points, Federal Reserve Governor Christopher Waller committed to fighting inflation in a whatever-it-takes fashion.

“If the data comes in as I expect, I will support a similar-sized move at our July meeting,” Waller said on Saturday at a conference by the Society for Computational Economics.

“The Fed is ‘all in’ on re-establishing price stability,” Waller added.

Still, Aniva Pawlowski, a financial advisor in New York, said inflation is going to keep going up as long as the Ukraine conflict continues and the United States doesn’t manage its monetary policy properly.

SOMEWHERE BETWEEN SLOWDOWN AND RECESSION

Despite the Fed’s aggressive approach to cool down inflation, U.S. Treasury Secretary Janet Yellen said that “unacceptably high” prices are likely to stay through 2022 and that she expects the U.S. economy to slow down.

Asked how long and severe this potential recession will be, Mallaby said that the United States is likely to experience a recession in the second half of 2022, and possibly the first quarter of 2023. “I believe this will last for two to three quarters, and that it will not be too severe.”

Brian Blanks, assistant professor of finance at the Mississippi State University, predicted a mild slowdown that growth moderates to a slower pace than last year. He indicated that many banks have noted customers’ checking accounts grew during the pandemic stemmed from the federal government’s American Rescue Plan. As a result, he quoted from Jamie Dimon, chief executive officer of JP Morgan, that consumers might have six to nine months left of spending power.

People have meals at a restaurant in New York, the United States, March 7, 2022. (Xinhua/Wang Ying)

Because of previous savings, Blanks argued that “Americans continue to spend money and demand goods and services despite the higher prices, suggesting the primary result is not changes in behavior but simply negative sentiment.”

The United States is going to be in a recession for at least five to six years until inflation properly drops, said Pawlowski.

While stating that “the job of quelling inflation falls on the Federal Reserve”, Blanks and Munseob Lee, assistant professor of economics at the University of California San Diego, agreed that the White House has fewer tools to limit inflation.

Lee agreed that one option is to ease tariffs on China that were put in place by the previous administration, which could help lower prices of imported goods.

Lee told Xinhua that expenditure on categories in fuel, food and housing “takes up a much higher share of low-income households’ incomes. Low-income consumers have a much more difficult time responding to rising food costs at the grocery store.” This is largely because people tend to shop at a cheaper store to respond to inflation, “but lower income households are often already shopping at the cheapest nearby supermarkets.”

While Republicans tend to point the finger at the 1.9 trillion dollars of American Rescue Plan Act of 2021 as the main cause of inflation, Sinclair wrote on Twitter, “I’m compelled by the evidence that it’s a mix of a number of sources coming from the pandemic and our behavior and policy responses to it.”

Blank also stated that “The current administration’s fiscal policy successfully helped many leave the pandemic behind with strong balance sheets, which has also stimulated demand.”

Sinclair further explained that addressing inflation is “a delicate job to cool demand to line up with variable supply.”

When it comes to a possible recession, Sinclair told Xinhua in an email interview that her research suggested that “we shouldn’t trust forecasts of precisely when, how long it will last, or how deep the next recession will be.”  Enditem